At the beginning of the chapter is a short scene where members of CP-0 appear. According to CP-0’s calculation, with the Pleasures and Waiters changing sides, the army is now on the Kaido side 20 thousand against the samurai side 7,000. Earlier in chapter 1005, the members of CP-0 said that the samurai army had 5,400 men and lost 400 people initially, the Kaido army had 30,000 men and lost 3 thousand people. Thus, in a short time, the Kaido faction lost another 7 thousand troops, including those who were defeated and changed to the side of the samurai.

The battle between Nami and Ulti took place quickly. Nami wins with the help of Zeus. Although Ulti once again dodged Nami’s attack, but with Zeus’s support, Nami’s move chased and hit Ulti. This attack is similar to Big Mom’s lightning bolts. Ulti’s condition is also quite bad after receiving Big Mom’s blow, so this victory is not too terrible. It’s just a short time for Oda to show Nami her new ability.

Zeus asked Nami to give it a new name, so Nami called it “Wata” (cotton), but it seemed that Zeus didn’t like it and called himself Zeus again.

Usopp captures Bao Huang with Blue Star and tells Tama to do an island-wide radio broadcast through the Maries (Merries, Merys, untitled). It is quite clear that after this broadcast the number of samurai factions will change significantly after the arrival of the Gifters. 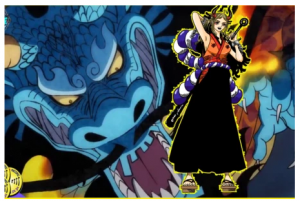 Part of the content of this chapter is for other characters to comment on the war situation on the island. At the end of the chapter, there is a scene where Yamato confronts Kaido.

Kaido transforms into a dragon and then flies to the roof, then transforms into a dragon. Both Yamato and Kaido were on the roof of the island. It seems that Kaido is in Wano country for a reason. Most likely it’s something related to “Joy Boy”, the mysterious character Kaido mentioned in the previous chapter after Luffy fell into the sea. 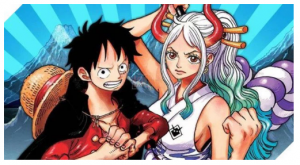 Yamato said he was going to the sea with Luffy but before that he had to kick Kaido’s ass out of Wano country. Yamato also said that although she knows she is not strong enough to defeat Kaido, she will hold Kaido here until Luffy appears.

Kaido replies that it’s not that easy Yamato. The final scene shows Kaido and Yamato rushing at each other, both using Haki.

Next week the story will take a week off according to Oda’s usual release schedule.