This week’s One Piece cover art shows Buggy splitting his body into puzzle pieces and playing with a chimpanzee.

The chapter begins in the main hall, when Tama was about to give orders to the Gifters who had eaten Kibidango when Queen shouted at her. Tama was so scared that he fainted and fell down.

Moving on to the 4th floor area, a girl from Who’s Who’s cat army is shooting Jinbe while Who’s Who is laughing at Jinbe. The battle between the two is constantly harassed by the interference of the surrounding soldiers of the Who’s Who. Likewise, Franky was also unable to concentrate on fighting Sasaki because he was constantly attacked by Kaido’s troops.

Returning to the main lobby, Tama regained her composure after being cheered on by Nami and Usopp. She finally gathered up the courage to give orders to all the Gifters.

Tama: “Gifters who ate kibidago, I order you to help Luffy and Momonosuke! Take down Kaido for me!”

Interspersed with Tama’s orders is the scene where the Heart Pirates successfully rescued the future pirate king from the sea, helping the story to extend a few more chapters. We can also see Momo crying for Kinemon and Kiku in Shinobu’s arms.

Immediately after Tama gave the order, the Gifters began to switch sides. Briscola switched from attacking the Samurai to attacking Kaido’s soldiers accompanying him. Many other Gifters turned to attack their former teammates.

Thanks to the ward loudspeaker in his hand, Tama’s orders were spread throughout Onigashima. The Gifters accompanying Jack also began to attack Kaido’s other soldiers. Jack was angry about it and Inuarashi was relieved. The same thing happened on the 4th floor, Poker – the guy who ate the Snake Smile was turning to attack the soldiers of Who’s Who.

CP0 feels confused because they don’t understand what’s going on. The Gifters that poured into the main hall to help the Queen were also competing to switch sides. Queen quickly realized that it all started with Tama, so he immediately prepared to shoot Tama with a laser. Nami and Usopp quickly ran away with Tama, and Sanji immediately rushed to the Queen’s mouth with a Collier Strike, causing the laser to explode in the Queen’s mouth. 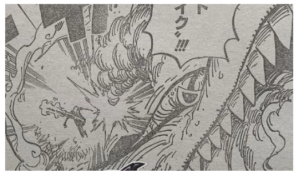 Sanji: “Stop calling me that. Did you also join that crazy research team?”

Queen transforms into hybrid form while talking. His hybrid form is also about the same size as a human, with a long neck, a robotic tail with a clincher attached. His right arm is holding a sword and remains in human form, while his left arm is a robotic arm with a hook that resembles a hook on the tail.

Change the scene to Zoro and Chopper. Due to the side effects of the new Rumber, Chopper has now shrunk to the size of a baby and is being held in Tristan’s arms. Chopper was now smaller than the samurai hat he wore earlier. Despite being the size of a child, Chopper talks like an old man. This new form of Chopper is called Babyjiji Chopper (non-old Chopper). 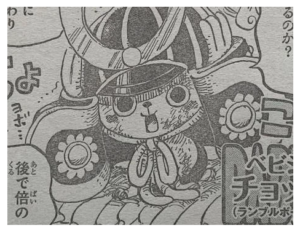 Miyagi tells Zoro that there is a super-fast healing potion in Zou that can heal Zoro’s body over a period of time. However, when the drug wears off, Zoro suffers a pain twice as much as usual.

Zoro: “There’s no time to consider. Give me that medicine!”.

Moved back to the area on the 4th floor. Due to the Giters turning their spears back, Jinbe was now able to focus on fighting 1v1 with Who’s Who. Who’s Who pulls out a dagger and casts Bullet Blade (Hagan, a move similar to Bullet -Shigan but with a sword) to attack Jinbe. Jinbe parried it with “Gyojin Karate: Karakusa Gawara Sei Ken”.

Who’s Who used Moon Bu (Soru) to dodge Jinbe’s attacks, then attacked him with Blue Feet and was stopped by Jinbe with armed Haki. Jinbe quickly realizes Who’s Who is using the Six Consciousnesses originating from the world government. While Jinbe was talking, Who’s Who began to transform.

Jinbe: “I remember now. There was a rumor that a member of CP9 had escaped from prison before. That made me curious as to why an agent of the world government was arrested. prison.”.