One Piece discussion: about Zoro’s return to the Wano battle, successfully performing the “escape cicada”

It was the opinion of many readers when Sanji handed Zoro over to Chopper. Marco is also nearby, will these two talented doctors work together to treat the Straw Hat swordsman?

One Piece chapter 1015 sees Sanji appear, attack the Queen and hand over Zoro, who is still wrapped in bandages, to Chopper. This is said to be a small hint by Oda to open the way for Zoro to return to the battle at Wano. Chopper is the doctor of the Straw Hats, so it makes sense for him to treat Zoro and leave the task of handling Queen to Sanji. The question is whether Chopper’s strength is enough to cure Zoro quickly or not?

Most recently, OnePiece fans have raised a theory that Chopper and Marco will work together to cure Zoro

This is also a very unlikely case. Before that, Marco was also introduced as a doctor and specialized in treating animals on an island. Marco can now use the blue flames from his mythical Zoan-type Devil Fruit to heal his wounds. Currently, Marco is also very close to Zoro and Chopper. Most likely, he will work with the Straw Hat doctor to treat the Straw Hat swordsman to help him return to the battle. In fact, the key members of the Beasts Pirates are still in good health, more than ever the rebels are in dire need of Zoro. With Oda being so “favorable” for Zoro, it is not surprising that he was treated and returned to the battle at Wano. 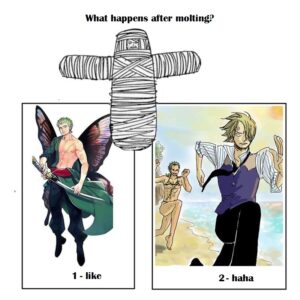 The other question is, after recovering and getting out of the “cocoon” that Sanji created, how strong will Zoro be and who will his opponent be? Before being defeated by Kaido, Zoro unconsciously used Conqueror Haki in his attack and injured Kaido and left a scar. With this small hint, it is likely that after recovering Zoro will be “buffed” by Oda Haki and he will also be able to use this power skillfully.

One more detail is that Zoro’s left eye has not been opened so far, is this a new step of his power and it will be activated in the later part of Wano. However, many fans also humorously think that Oda is the one who knows how to “fool” readers with extremely “crash” shots. Currently, many fans are looking forward to Zoro’s spectacular “cicada escape”, but it is possible that Oda will do the opposite to create a surprise for readers.

These are the views that many One Piece fans have discussed a lot in the past and some subjective opinions of the author of the article. Whether Zoro will be cured and who will do it will remain a question that only Oda can answer. What do you think about this, please leave your comments!