One Piece chapter 1016: What is Zeus’s power after becoming Nami’s Clima-Tact?

Will Zeus bring Nami any surprises?

In One Piece, Zeus is a homies created by Big Mom with her Devil Fruit powers along with fragments of Big Mom’s own soul. According to what is shown in Whole Cake, although stronger souls will create stronger homies, they will not come with the person’s original abilities. The power of each homies is completely based on the objects they enter.

For example, when souls enter the clouds, they will be able to control rain, wind and lightning, enter fire, they can create heat balls, enter carpets, the carpets can even fly. In other words, Nami’s Clima-Tact will now be enhanced by Zeus with all of its abilities, not just creating lightning like when Zeus was just a cloud. 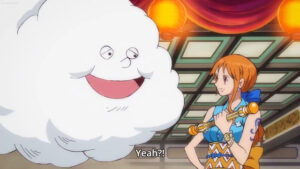 The first is the ability to transform

Previously, Nami’s Clima-Tact had the ability to zoom in and out thanks to Usopp’s improved Pop Green ability, which was convenient for Nami to carry around, now this ability has been upgraded by Zeus to be able to transform. into any shape, such as a spiked club.

The ability to control the weather

Before Zeus, the weather stick was capable of creating balls of heat, lightning, wind, clouds, snow, and rain. Currently after being enhanced by Zeus, I guess it will develop some “new functions” such as:

– The ability to pursue targets and has been demonstrated because Zeus is a thinking cloud.

– The ability to reuse Big Mom’s moves, such as Indra, Maser Cannon, but in a weaker version.

– Develop some more destructive moves based on natural disasters, such as tornado, lava, wind blade, blizzard, …

– Developed a defensive ability, previously Nami’s most commonly used move was Milky Ball, similar to Smoker, quite useful against small children but completely useless against those at high levels. With the help of Zeus, this ability can be enhanced quite a bit.