Boruto chapter 60 spoiler prediction, chapter 59 summary: To prepare for the upcoming war, Code “recruits” a new member, Daemon. Meanwhile, Kawaki is thinking about implanting a new Karma! What will happen next?
Summary of Boruto chapter 59

The chapter begins with a flashback. I see Code (as a child) teasing Kawaki. Code hate doesn’t understand why Kawaki is being used more.

I envy you, Kawaki. You’ve already been selected as a vessel. I..I will kill you with these hands…”

While saying that, Code used Karma to push Kawaki down. Kawaki woke up startled. Turns out what happened just now was just a dream. Beside Kawaki now were Amado and Sumire. After hearing about Kawaki’s dream, Amado said that even though Isshiki was dead, Kawaki was still his vessel. Amado then talks about Boruto’s plan to pass on Boruto’s Karma to Kawaki’s Code. It’s not impossible, but it’s risky because Code won’t let him do it. The best thing Kawaki can do now is improve his power and “carve a new Karma”.

Amado also added that Naruto is no longer able to defeat Code because the Seventh has lost the Nine-Tails. The two argued for a while before Kawaki left. 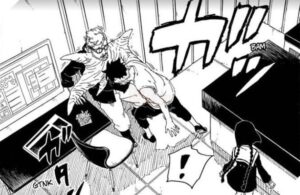 The story turns to Ada and Code. Code says he doesn’t care about Kawaki but Naruto is the current target. At this point, Ada also reveals that she can only fight with basic taijutsu. In return, she will be the eyes and ears for Code, as long as Code is her “knight”. While the two talked, Bug was quite confused. He wanted these two “crazy guys” to leave here as soon as possible. Code said that since he hadn’t killed all the soldiers outside, they must have been more numerous by now. Looks like Ada suggested Code find a new ally. 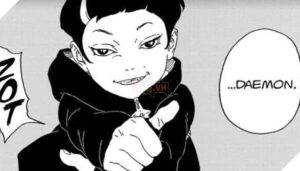 In another development, Kawaki was quite upset because of thinking about transplanting a new Karma. Later, we see Amado talking to Sumire. He said that Isshiki’s power still affects Kawaki. He also suggested the new Karma carving to Kawaki. After hearing that, Sumire suspected that Amado was still hiding something else.

The chapter continues with the image of Code releasing another cyborg named Daemon. This guy is Ada’s younger brother and he is extremely hyperactive. Daemon possesses quite special abilities. Increases strength according to the opponent’s killing intent and “recreates” the attack just seen. Daemon then quickly “cleans up” all the guards.

In the last page of the story, Amado and Sumire talk about Kawaki. Boruto chapter 59 ends here.

spoiler boruto chapter 60
With the arrival of Daemon, we have every reason to suspect that Code will have a few new allies. Thus, the high probability that Code’s next attack will be monumental and will give readers Naruto-style fights.

Given the current situation, Kawaki would certainly accept the new Karma implant. However, why would Amado expect Kawaki to have Karma? This we do not know yet. Maybe he was just preparing for the upcoming war, or maybe this scientist had other plans (is the Amado potion that Boruto gave him involved?). 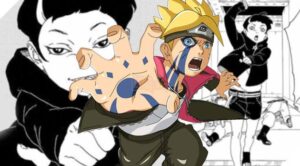 Boruto’s pacing is slowing down a lot to give the characters time to develop before entering the upcoming all-out war. In chapter 60, we may come to Boruto and his teammates’ journey to improve their ninjutsu.